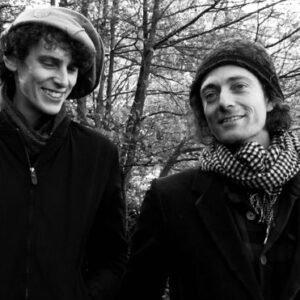 The Brothers Gillespie appear with Good Habits and Mishra as part of the Thursday Night Festival Club. Tickets for this event are limited and only available to purchase when purchasing a ticket to another Thursday Manchester Folk Festival event.

Described by Folk Radio UK as ‘weaving an especially compelling magic’, and 'showing off British acoustic music in its best possible light', Northumbrian duo The Brothers Gillespie sing traditional and original songs with lyrical and visionary intensity, rich with sounds of soaring sibling harmony, guitars, flute, fiddle and mandolin. Drawing inspiration from powerful lineages of poetic songwriting, the folk revivial of the 60s and 70s and older source traditions they make music that is deep-rooted and speaks to the present moment. Their songs and performances are animated by a rare energy, both earthy and ethereal, romantic and radical.

Brothers James and Sam Gillespie grew up in the small village of Wall on the old Roman frontier bounded on one side by a faery hill and on the other by the wise old river they call the North Tyne. It was in this valley that music took hold of them. They found a world that was still alive, that breathed magic and which became the inspiration for their song. Theirs is a music of borderlands, of the thresholds between worlds. The brothers have travelled widely and sung their songs at campfires, concert halls, Parisian circuses, folk clubs and a range of UK festivals including Cambridge Folk Fest.