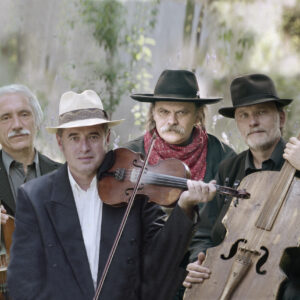 MUZSIKÁS appear as support for The Gigspanner Big Band

Using the name given to musicians playing traditional folk music in Hungarian villages, MUZSIKÁS perform an exciting musical experience where the audience is transported back to the remote Hungarian village atmosphere, where traditions survived through the centuries.

Members of the group play and improvise in the style of the old traditional Hungarian folk bands in which the solo violin and the song typically were accompanied by the three-stringed viola and the contrabass. The music of MUZSIKÁS can be characterized as the traditional arrangements of authentic Hungarian folk music featuring a style that is typical of the best village musicians. It has nothing in common stylistically with the Gypsy-Hungarian style, but is rather the true folk music of
Hungary, the most beautiful melodies of which were considered by Béla Bartók to be equal with the greatest works of music.

The winner of the WOMEX Award for World Music in 2008, after 40 years of their unrivaled career,
MUZSIKÁS is the most renowned and popular Hungarian folk music ensemble worldwide.

MUZSIKÁS pioneered the global acceptance of Hungarian folk music. Their unique musical skills, instrumental knowledge and musical versatility have seen MUZSIKÁS collaborate with many genres of music, from folk and world-music to classical, klezmer and jazz, and even to alternative rock music. They have toured all over the world including tours in Europe, North-America, Japan, Australia, New Zealand, Hong Kong, Singapore, Taiwan and Malaysia.

They have already presented their exceptional live performances at the greatest festivals and in the most significant concert halls, such as the Royal Festival Hall, Royal Albert Hall, Barbican Center and Queen Elizabeth Hall in London, Théatre de la Ville and Cité de la Music in Paris, Santa Cecila Academy in Rome, Concertgebouw in Amsterdam, and Carnegie Hall in New York.