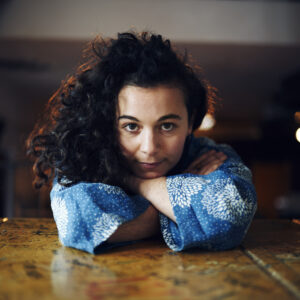 Flo Perlin appears as support for The English Fiddle Ensemble

Flo Perlin is a contemporary folk singer-songwriter from London, UK, with Iraqi and Belarusian heritage. She grew up surrounded by a diverse range of music, learning to play cello at the age of five. The guitar put a spell on her when her teacher from Columbia introduced her to the world of Bossa Nova, which influenced her own unique finger picking style. Flo taught herself piano and started singing as a way to begin writing songs from the age of ten.

Over the years Flo has been presenting within her music how contemporary folk and story-telling is evolving and has incorporated her diverse love of music into her new album ‘Characters’, which was recorded at MAP studios in Kentish Town with a group of amazing session musicians. It will be released later in 2021.